A Look Back at Webster’s Distinguished History

During the unusual time we have all shared over the past few months, we at The Maplewood have had many opportunities to reflect on the wonderful community of Webster. We cannot say enough about the ways that people reached out to us throughout this challenging time, offering support to our residents in a wide variety of simple gestures and good deeds. We truly could not have come this far without the generosity of spirit you have shown us. I thank you, our Webster neighbors, from the bottom of my heart for all that you have done for us.

In focusing on the immediate issues of the present, we have had the opportunity to reflect on the past as well. The Maplewood has been a part of Webster for 47 years, and our residents have told us many stories about the years they have spent here, the changes they saw take place, and the memories they made as they worked, raised families, and made their homes here. 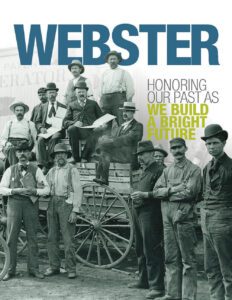 We decided to delve deeper into what makes Webster such a special place. To show our gratitude to Webster town and village residents, we created Webster: Honoring Our Past As We Build a Bright Future, in which we compile some of the history that made this town such an important part of Monroe County—and of our state and nation.

In this publication, which first appeared as a magazine delivered to every household in Webster, we explore the enterprises that put Webster on the national map, as well as some with a local focus. Every story centers on the people whose foresight and willingness to work hard brought ideas to life—just as The Maplewood’s own founders, Thomas and Johanna Chambery, developed new ways to care for the elderly in a homelike setting back in 1947.

You can access all seven articles from the following links:

I’d like to take a moment to thank the Webster Museum, and especially historian Lynn Barton, for her assistance in supplying photos and expertise for this project. Ray Brewer, Xerox historian, went out of his way to provide us with the photos we needed of the Webster campus, and Anthony and Audrey Pantas were gracious and helpful in giving us access to their own photo albums for pictures of Webster Candy Kitchen. The team at IMAGN, the archive of photos from Gannett’s newspapers, did a terrific job in finding photos of Irondequoit Bay Bridge from the 1960s, and Charles (Ed) McPherson of Overhead View Drones provided a beautiful photo of the bridge. I also want to acknowledge our creative team, including editor Mike Gastin, graphic designer Mike Sukhenko, and journalist/author Randi Minetor for their work in bringing this publication to fruition.

We hope you enjoy this look back at the companies and people who made Webster a place “where life is worth living.” The staff of The Maplewood takes great pride in its role as a longtime part of the fabric of this community—and we look forward to serving your needs for many years to come.