Posted: 8 years ago
by Sarah Hodges 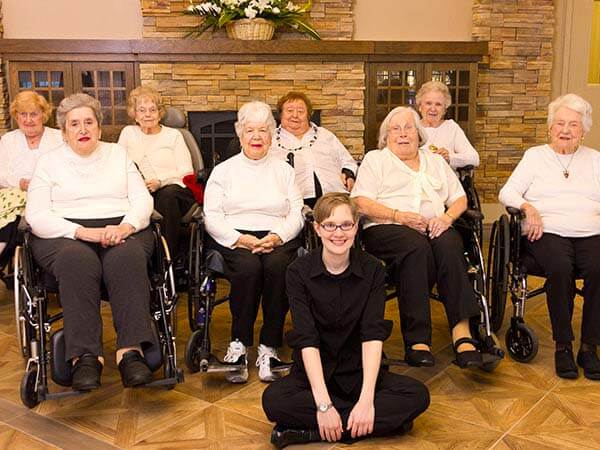 Walking down the halls of The Maplewood, the familiar vocal melodies of favorite tunes start to drift into the peaceful air. Approaching the entrance of the Elmgrove Café, the sound of warm applause completes the final sustain of the opening number. Entering the spacious and inviting community gathering area and seeing the size of the assembled crowd, it’s clear that the space has been transformed into a concert hall. The residents that make up the Maplewood Chorus are the headlining act, playing to a full house.

This holiday season concert marked just the second performance of The Maplewood’s vocal ensemble. The reaction from the Chorus’ debut a few months earlier gave the eight singing ladies and their conductor the confidence to schedule a follow-up performance at Christmas time. The ovation from the holiday performance has served as a launching pad for more in the future.

The Maplewood Chorus has its roots in community sing-alongs. The son of a former resident would play and sing to an ever-growing group of residents several nights per week, always encouraging his fans to join in. Maplewood Activities Assistant Sarah Hodges noticed how residents would sing along during the performances, as well as in the hallways and in their rooms afterward. It occurred to Sarah that the seeds of a resident vocal ensemble were in-hand. As Sarah shares, “I thought, wouldn’t it be nice to give these residents an opportunity to all sing together? And the chorus was born.”

The Maplewood Chorus has become something more than simply a singing group. Chris K, daughter of resident Marie G, stresses the importance for residents to have something that they’re able to do independently. “It’s something that’s all her own,” Chris shares, along with how her mother likes to practice with the group and then perform for her family. Marie G compares performances to presenting a surprise to her family, because they didn’t have to assist her in any way.

The Maplewood Chorus also provides an additional social outlet for its participants, who may not otherwise see each other as often because of differing schedules. The group gives Maplewood residents an opportunity to connect with other residents that share an interest in music. As Chris K underlines, “[The Chorus builds] a community and sense of self-esteem.” Chris describes her mother’s joy, saying, “Her face lights up when she talks about it.” Marie G adds, “I think it’s great, and I look forward to singing. It’s good for the residents.”

Sarah Hodges offers her excitement for how the group has progressed. “Seeing these women blossom has been such a joy… because I love these ladies like they are my own grandmothers. I am honored to be part of their special group.”

ActivitiesMaplewood Chorus
Back to Blog
Next Post
How Accurate and Helpful is the CMS 5 Star Rating System When Choosing a Nursing Home?